The Aa Line Preamplifier IV – The Power Supply Part I

to everybody. Today I will continue the series about the Aa-DHT-Preamplifier, I assume some people are waiting for the completion of the series. In late summer I did use the good weather to concentrate on other topics than audio, I did start a new blog with a totally different topic, so the work at the preamplifier did stick a bit. Everybody might understand without real pressure the continuing is low since I do use a almost the same preamp for a longer time already. But we will see if this "final" version is able to preserve new experiences.

I did use the same steel case from Hamond like with the line stage for this power supply. If it would be just a PSU to feed for the line stage stand alone, the expenditure would be very comprehensible. A classic anode supply with rectifier tube and a charging and filtering chain of capacitors made up with the choke would do the job already perfect, since the design of the line preamp is completely class a. But the filaments of the directly heated triodes need to get a well made supply each, since their sensitivity for hum and other unwanted restrictions is a lot higher, than with any indirect heated tube. As already shown in the preamp descriptions I do use for that reason Rod Colemans constant current supply boards. These need each a own raw supply made up from separate secondary windings of a transformer, able to supply quite solid currents, here with two Aa in parallel we talk about 1 ampere each side. Conservativly spoken the transformer should be able to deliver a good 1.5 amperes for safety, noise and long term operation. To work out the final 3.8 volts at the cathodes of the Aa tubes a 12 volt transformer will be a good choice. It has to be determined exactly, otherwise higher voltages need to be burnt down and will create unwanted heat in the enclosure. In the first stage a typical rectification stage is necessary. I will use four 1N5822 fast recovery diodes for that job and low esr capacitors for the filter chain and  dropping resistors per channel to feed the boards.

But with the additional planned phono amplifier I need a more complex power supply. Since this second preamplifier will be realized with indirectly heated tubes, a higher degree of complexity for the anode supply is necessary, but in reverse with such tubes the filament supply will be quite easy to be realised. So my anode supply will divide behind the first filtering cap for a second rail with additional choke and a tube regulated output stage. Here a the integrated tubes of the ECL82/84/85 line (combined driver and power tube in one glass envelope) together with a 90C1 as stabilizing device are a smallest possible physical design for such a stage. This stage needs to supply less than 20 mA of regulated current output. The tube sockets and a extra capacitors are already installed for this later needed output stage. 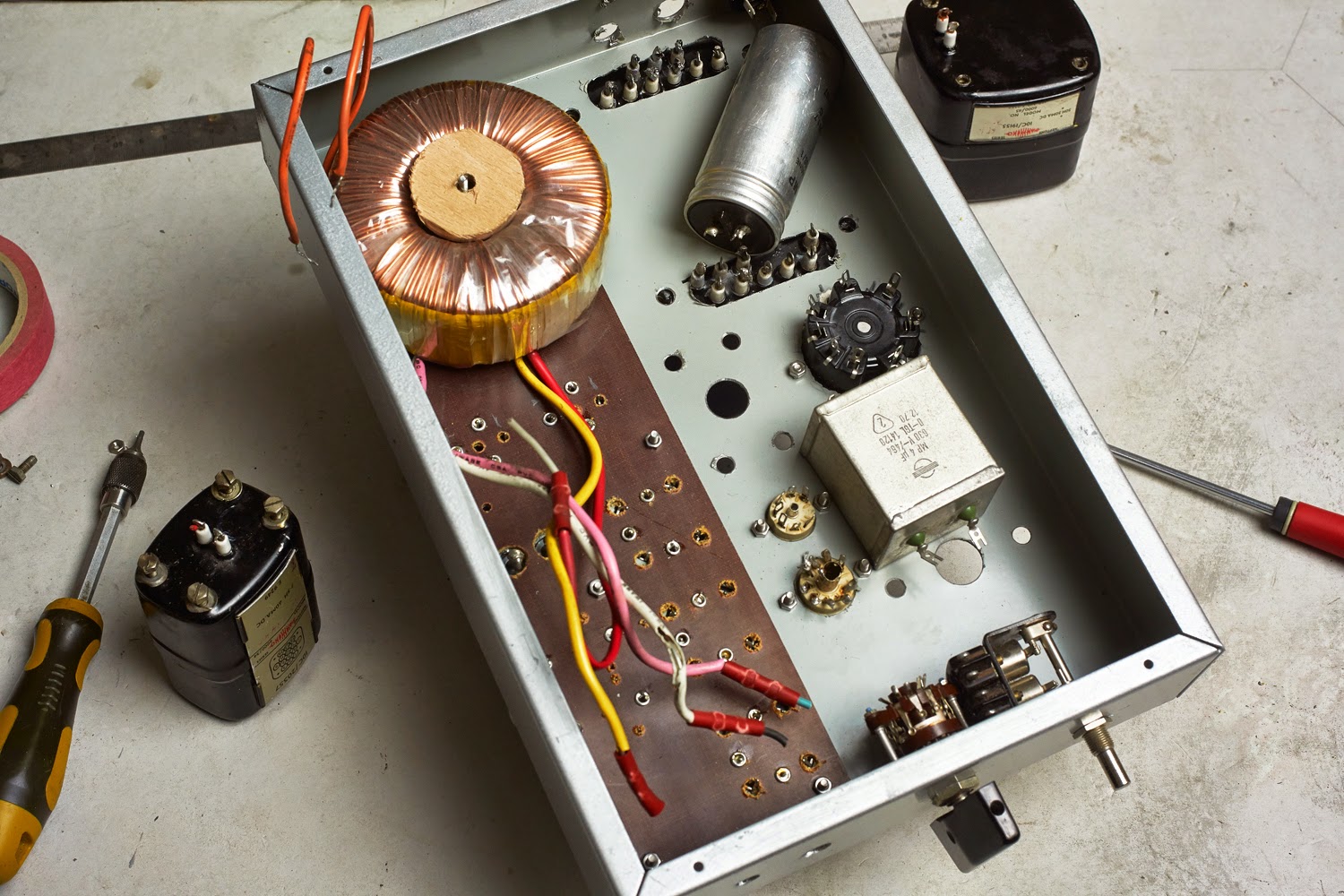 In order to keep the grounding issues under control I did made a perspex board where all capacitors are mounted off the chassis and can be separatly grounded to avoid hum loops. I did expect to have a quite complex switching schematic, so I will install two separate switches for the different heater modes and anode voltages for both amplifier parts indicated with lamps.

Since the middle of the 1990's I did collect at ebay parts for tube amplifiers, which were almost impossible to find before without the web as source. The perfectly made Parmeko transformers are one example of these rare and obsolete parts for the use within tube  amplified devices. With c-core laminations and oil filled sealed enclosures, porcelain isolated contacts and very conservative ratings, these transformers belong to the best made ones in history. The most of them are made for the British MoD (Ministry of Defense) and were used at professional or military equipment and there is nothing comparable made known from any other country. Even with Ebay it is not very easy to find the right values and specifications for all projects in mind, so it took several years to collect this set which is now used for this power supply. A mains transformer with a good variety of anode voltages (300-270-250-0-250-270-300V), a perfect rectifier filament winding with 4-5-6.3V and separate 6.3V filament windings is a very good choice. The two chokes with 30H and 50H are a perfect match for both anode supplies. Only the filament transformer for the Aa's is a modern torodial design.
With this mains transformer I can use rectifier tubes with 4 volts filament, this means I can use AZ1 or AZ11/12 which are easy and quite cheap to obtain even todays where the most rectifier tubes have skyrocketed their prices. There are some early types which are equipped with mesh plates, a sound wise perfect value for such a project with low current drawing figures.

Read on soon about the next part, Volker

after a long period of absence I did plan to restart this blog with another Aa-preamp part to be the next entry. The Power supply should be topic shown soon, but another case of death needs to be covered first – Jean Constant Verdier, the ingenious mind of the legendary magnet bearing turntable has died recently.

Talking today in 2014 about turntables has the same attitude than talking about car design. Both issues in terms of technical inventive creativity have disappeared, instead a solely ostentatious understanding of design issues hat taken place in both fields. The bespoken record player appeared in 1980 as one of the last great innovative designs at the audio market, first seen at Maison de L'Audiophile in Paris, France. "La Platine Verdier" offered several new design issues at the first time for record players, when it entered a almost saturated market, dominated from typical japanese mass production decks, mainly introduced as direct driven designs. Only a few other sub chassis designs had survived beside them, mostly light weight built, like the Thorens and several derivated like the Linn LP12 and others. The Verdier came out with a hefty mass of almost 50 kg with a completely new concept to find the best possible options for vinyl operated audio. Here it has to be named with reuse of 12 inch studio tonearms, low compliance cartridges and incorporating first a high mass platter, it did set the path for the current audiophile record player. It was designed to resemble the mass of the record cutting process platter to catch up the circumstances during the pick up process. Next a extremely solid (20 mm) sized axis with massive bearing housing was introduced as a controlled resistive element. But the main novelty of the whole design was the magnet decoupling mechanism, which kept the platter off resonances. In combination with a spring-air controlled pneumatic acting feet system for additional decoupling of the artificial stone base down to 3 hz, the separation of the motor unit into a own chassis and a very long and thin string, the Verdier  has set the pace in terms of suspension, decoupling and weight for a mass players. All features together opened a whole bunch of aural attitudes, which have not been archived before, nor they have been completely captured up by any later design.

Today it seem to exist strange relationships in the purchasing behavior of SUV-cars and between  turntables. Where attitude tops function, conspicuousness resembles modesty, their shear weight and size will do some job? Todays formal principles of chromed or gold plated surfaces for drilling rigg like designs, seem to have overtaken any functional issues for more gestural attitudes with representative character.
In opposition the Verdier turntable is a masterpiece of functionality, simplicity and material choices as perfect example of the "form follows function" theory of the early 20th century modernity. For lots of people it is ugly, but for some aestetical educated, it is may be the most beautiful design ever made, since it does not show any subtile compromise to more decorative ideas. Only the motor unit could have been designed a little better for the same basic understanding.
The so called "magnet bearing", which is technically seen the wrong designation, gives this player a unsurpassed bundle of aural attitudes. First there is the unexcited calm, which gives a unsurpassed view into the rhythmic performance and a precisely defined soundstage. The naturalness of dynamic abilities, timing and the finest resolution of micro details are bundled together like none. If you own this record player, you don't think anymore about other options, – it is just boring.


The Verdier will be definitely my last record player to cover my record collection (since 20 years), for the coming future it needs anyway other concepts to play digital stored music.

Thank you so much Jean Constant.

Try to get one since it is still possible, you never know what is coming next.