For Lunch in Paris

when I was a teenager, we – my friends and I – did regularly after hanging out late at Friday nights, some spontanous road trips to Paris in order to have breakfast in one of the countless street bistros early in the morning. Driving through all the night is something for young people with lots of energy, when getting older such dangerous practice gets lost. But recently my friend Andreas asked me, if I would like to go for a Sunday lunch with him to Paris. This time the manual was not set for breakfast with croissants and cafe, but for a colorful lunch with the best Japanese sushi and sashimi accompanied by some British beef slowly roasted in a typical large scale American barbecue smoker, made in China. Exquisite Japanese Sans (masters) like Kanno, Shishido, Shindo were booked to form a delicate audio menue in conjunction with a Line Magnetic loudspeaker system. 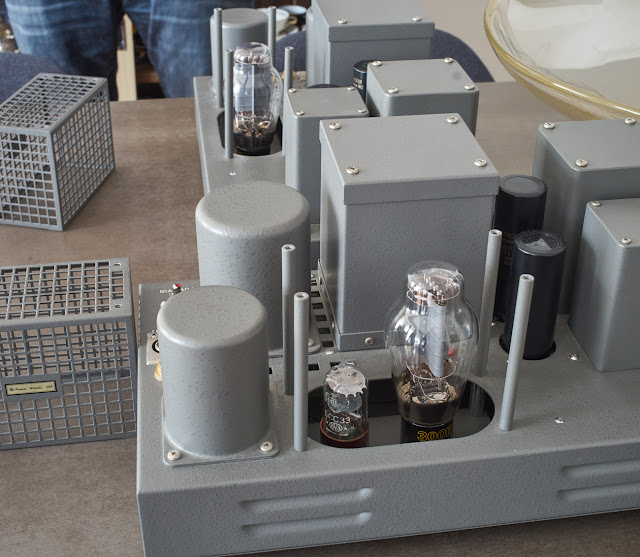 In the Premier Arrondissement, in the heart of the town, lives the gourmand Philippe F.. He is a extremely polite and cordial man with good sense and taste for several interrests in life. So it does not wonder to meet a man who has collected a good variety of top class vintage single ended amplifiers from the important period of the 1970 to 1980ties, which can be hardly found outside of Japan. He combines them in his set up with vintage classics from the 1960ties in Europe, like tonearms, pick up cartridges and record players, extended by some today impossible originally to find replica loudspeaker components of Western Electric origin to a majestic audio system. Exceptional in many terms is his Line Magnetic speaker system LM-3, which got highly upgraded with top line products to form some final improvements. The tweeter got exchanged to LM597, presumably the crossover as well to best Line Magnetic standard, and so the Tungar power supply got included to feed all three drivers with three independant lines at once. The bass driver is here now the legendary LM4181.

We started listening with a Tim de Paravicini preamp and a pair Shindo 300b Limited power amps, equipped with original WE tubes to adapt the whole system and get used to the given room attitudes. After half an hour we switched to the brought Shindo Vosne Romaneè preamp, which was Philippe's major interest to listen to. The standard Ortofon SPU/A got exchanged to the adequat Shindo derivate with a clear destination into refinement. As next step the 300b Limited got exchanged to the pair Kanno 300b amps, which showed up with a very well outbalanced souvereignity. Here now several 300b tubes and as well different rectifier tubes have been in service and showed some typical tonal fine tuning. But as everybody know, such complex systems are mainly defined by their acoustical transducer systems. The loudspeaker in a given room defines more than 60% of the soundstage in a given system. At this point it was quite difficult for me to find decisive opinions about all the changes.

Readers of my blog learned about several presented systems with Line Magnetic LM22, extended with LM597 tweeter and several different solutions for the low frequency finalisation. I spell out no secret about the fact, that a 22a horn with its dedicated tweeter 597 is a combination, which performs a world class solution on its own. But its exceptional finesse, resolution and transmitted energy makes any adaption of the lower frequency part to a life task. All named sets which have been presented here within the last years, have in common, that all owners permanently try to improve the low frequency support of their horns. The most do incorporate a replica WE7331 dipole enclosure or a downsized derivate of such design principle as by far best type. These are driven by field coil motorized alternatively permanent magnet units of diverse makes and from variable origin and vintage cinema productions. These get powered with one or more amps of different technology (tube-, switched-, transsistor amps) or get powered active to passive, with different crossover types or even with DSP.  To match the horn around 300 hz with more or less wide transitions and different steepness, all these finalisations show how complex it is to find a natural tone. The lighter and faster wideband woofers from Klangfim, the KL405 in different connections, seem to be a passable way for some. This means the low freqeuncy unit needs to be exceptional fast, deep and extended into the middle frequencies with wide overlapping parts between horn and woofer. This problem is the achilles heel of the 22a horn. The bigger wooden horns WE12/13/15 and the metal WE16a perform a lower frequency cut off, so their response shows a different, a bit easier to realize preference for invisible completeness.

The here shown frontloaded enclosure from Line Magnetic, which incorporates a 18-inch field coil speaker, is a exceptional solution for all such requests. Upgraded to LM4181 the enclosure can be used as fullrange unit up to 5000 hz, or equipped with different crossover designs to match all named horn types with different take-over frequecies. The LM4181 is like its original predessor from Western Electric, the wide band coned version of three different speakers, which share the same motor armature. The speaker shows elegant wide band attitudes with a unsurpassed fast, refined textured low frequency support down to the deepest levels of bass, without the otherwise dulledness, which is so typical for modern large pa-systems. The enclosure can be opened in the back to form a dipole, which transports together with the front loading horn uncomparable attitudes, which are hardly found in other design principles, like backloaded, vented or bass reflex systems. The combination of frontloading in a dipole is known to be my favorite solution. It is giving large coned systems the property of refined fastness and articulation otherwise rarely noticed. My own speaker showed me once the superiority of such design principle over other more commercially practicable principles.
Now here Philippe's installation shows simply the best connected low frequency range I have listened to in conjunction with the 22A. It is huge and it is high, it is a real piece of space determing furniture, and makes the positioning in the room difficult in both terms, acoustically and visually. This is not the type of furniture which makes life partnerships happy. It takes a good footprint and it needs some back space, as with all dipole systems, its backwarded radiated energy reflects from its backing wall. The system ideally will need some more space than Philippe will actually allow to spend, particular in corners even more, but such better position (a good meter) off the side and backing walls will tremendously increase the soundstage in his room, ideally to a almost invisible holographic soundstage. Another aspect is the door width to get it into the house and the final room.
But soundwise, in terms of a deepest, most refined and fastest organic bass response for musical completeness and integrety, this is a top notch solution of highest expectation to match the world class 22a horn with its invisible tweeter. So far simply the best solution I have listened to and it is straight available by order. No woodwork, no carpenter, no nightmares of finetuning, no lost last hair from endless frequency matching or overboarding bills of frustation killing substitude drugs, like alcohol or expensive food, – maybe only a good glass of wine, while relaxed listening to a record of Nina Simone.


At our way back we made stop at a typical French Hypermarché to get some food for the evening. We bought some exquisite cheese, baguette and were looking for some wine. The range in French supermarkets is phantastic and I needed some time to evaluate some of the offers, when Andreas noticed loudly from two shelves far away: "Look they have all the Shindos here, Latour, Lafon, Vosne-Romaneé, Monbrison, Lafitte, really all!" "Ok, why not staying on with a Vosne-Romaneé for the dinner."