reading here. Before I came to Hong Kong I did try to use several sources to get some personal contact to the extremely vivid Hong Kong vintage audio scene. I would estimate that almost 70% of world wide vintage audio products sold at the platform Ebay since 2000 did strand in Hong Kong. I follow since the early 2000nd years at the Review33 platform such activities with fascination. So I do know quite well what was going on here. I could verify the most interesting figures of the scene over the years within this forum. Beside this scene several people in Europe did mention important people living in Hong Kong to me, which I needed definitely to meet...  So I started already a year ago to establish contact lines using email, forum mail, etc.. Some of them I did try to contact several times. At the end of the day I had not even one response when I left Germany two weeks ago. It was absolutely frustrating for me coming here and not to be able to get in contact with some of the interesting figures living here. So if here no coincidence will happen, I will not be able to report about this interesting scene here within my blog.

Today I went to a market in Sham Shui Po, a very typical Hong Hong street market were lot of things for every day needs are sold. Clothes, vegetables, meat, animals, short the well known market offers. At one very far end this market shifted suddenly to some sort of flee market with a tiny couple of stands selling typical flea market goods. Suddenly I did realize in my canthus some tubes on top of a case, designated with a golden relief inscription 6SN7. 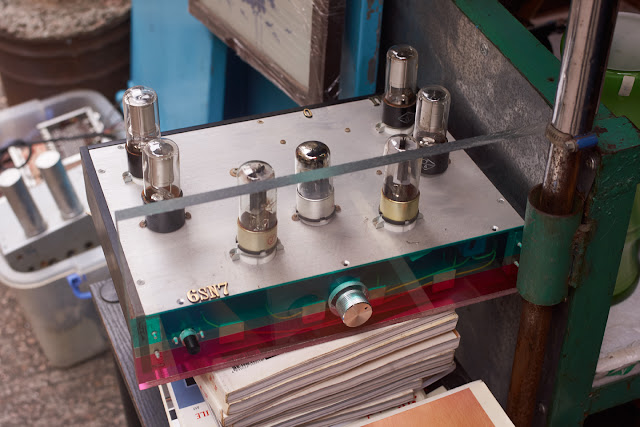 I made a side step into that stand. There was a man sitting and welding tube amplifiers together from used parts. Actually he had a 300b amplifier on the bench equipped with Audio Note output transformers driven by EF37A tubes, – well,  not the worst topology. 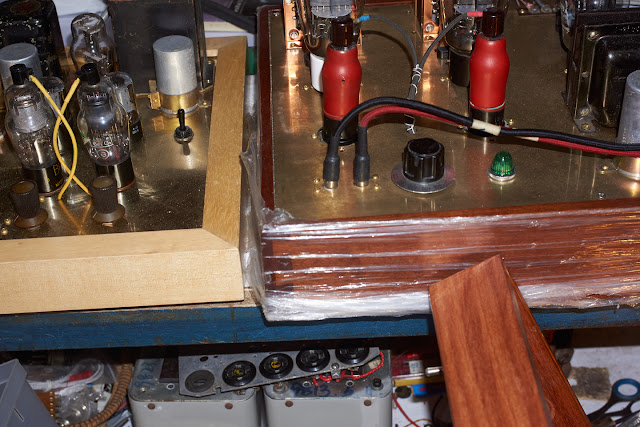 With a second look I could realize that he had a whole bunch of Chinese output transformers from the 1960ties lying around. These were looking extremely well made, almost identical to early Tango or Tamura iron with porcelain perls as isolators and Copper cans. These types were Shanghai brand 9K PP primary and 4/8/15 ohms at the secondary with a power output of 20 watts. These were really nice looking. I did try to get in contact with the guy. Unfortunately this ended like always here, the guy did not speak the slightest word of english. But I persistently did try on to communicate with him, since somebody else came and tried to support his friend. This man was able to difference the words yes and no in English. It took a whole while till I realized to take a pen and paper and I did write down some unmistakable synonyms like Western Electric, WE15A, WE91A or LeakTL12.1. Reading such words opened the mind of this guy, he did realize that I exactly did understand what he is doing. I gave him my blog address and told him to come back after he might have informed what I am doing here.

Being in Hong Kong now for two weeks I have learned that this city rejects any sort of history. The most architecture is new, all historical has been demolished and resembled with modern buildings by the Chinese Government. Of course they have an interest to make the British time forgotten. I cannot imagine anything older than this period to be desired by typical Hong Kong inhabitants today. If you walk through the streets you will not see private cars older than two years, everybody has always the newest smartphone, mostly two, computer and all architecture rejects any historical form. It seems to be fact, that history is a strange smell for the Hong Kong Chinese. I have never before seen people acting so deeply history forgot than here.