today I come back to an installation that I last discussed in 2017. Having described this chain as exemplary and outstanding several years earlier, it was at this time that its owner began attempting this set more linear qualities to educate. I would like to remind you once again that a classic analog tube amplified Shindo chain with a typical Monbrison tube preamp, a pair of the early legendary 300B single-ended power amps and analog three-way crossover with historical components such as oil-paper capacitors and auto transformer in combination with the LineMagnetic 22A/597A and WE7331A speakers. In these days changing from smaller dipole housings each equipped with Pushpull Klangfilm KL405 14'' basses had ensured outstanding results. I have described this chain in detail and also looked up for its variants in other places for comparison, everything is well documented in this blog within the past years.

In this last stage of expansion at that time, dipole bass enclosures got exchanged to larger and more solid made enclosures 100% comparable to the vintage originals from Western Electric in terms of material and design here manufactured and additionally fitted with LineMagnetic 14'' field coil drivers. In this last article, I did describe in 2017 that the original quality and restrained sound structure with the new, much more powerful and heavier paper cone bass speakers was no longer able to deliver the homogeneity and natural unobtrusiveness, that I value so much in favor of a more typical PA tuning.

A lot has happened in the meanwhile of five years, especially in all of our lives. We are now familiar with numerous corona virus variants as with their medically correct names, for a few months we have been able to correctly decline all weapon systems of the German military and their NATO partners and we are happy that as a result of all this the inflation values ​​​​in our country measure our quality of life in the low double-digit range.

But also in this audio set up numerous stages of evolution were declined. First, the entire tube electronics were replaced in favor of a fully active DSP-supported digital amplification terminal. So it brought the possibility to switch from three to four and five-way systems. The LineMagnic midrange and tweeter horn systems were also exchanged for larger, similar horn system. Instead of the 22A snail horn, a Susuma Sato interpretation by a friend, LignoLab owner Norbert Gütte, was used. This means a completely double-walled construction with a resonance-reducing quartz sand filling. 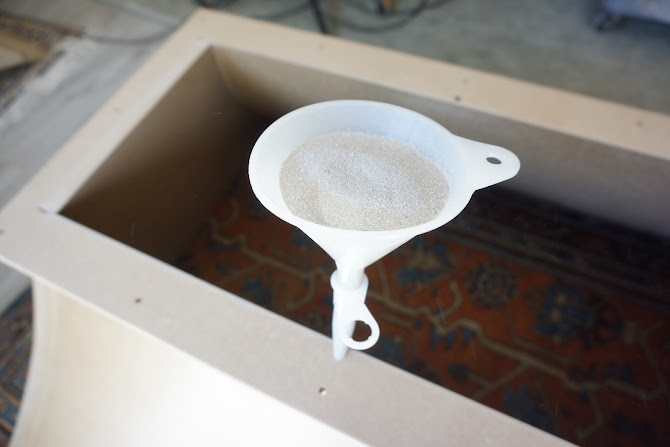 Norbert Gütte offers both curled necks and straight necks of different lengths for the sato-typical square meter opening. So it makes sense to evaluate different sized and different driver systems. From the classic 3/4'' pressure chamber driver to the 6.5'' paper cone driver, everything can be adapted to a dedicated straight horn throat in a mechanically optimized length. One after the other, modified Atlas/Klipsch drivers from Dietmar Hampel, JBL / Selenium 405, Celestion AXI 2050 were used. Modern PA drivers like the latter are of course no longer made with Alnico magnetic materials, but ceramic materials are used to achieve optimum efficiency in the PA dedication. With the 3/4'' version, the straight horn neck extends backwards over a distance of 2.40m and has to carry a solid weight. This requires a support system made from 12 meters for each side from typical Bosch/Rexroth structural aluminum profiles 40x40mm. The entire unit, consisting of the 7331 dipole bass enclosure, Satohorn and Mundorf AMT 197PP27R-740-452-CDH tweeter horn built into it from the Pro Series, is reinforced with these profiles and movably mounted on castors. One unit therefore easily reaches 1.00x1.72x1.80-2.40m (WxHxD) variable in depths by the preference of the middle tone driver size and a weight of 150 kg.

After many attempts with different bass drivers, such as the Altec 416B/A, the Sonido 12'' driver is now being used in the dipole bass enclosure as final solution. The comparatively small 12" cone only works satisfactorily in combination with a SW Becker B1000 subwoofer with 18" bass drivers per channel, which are actively used below 80 Hz. 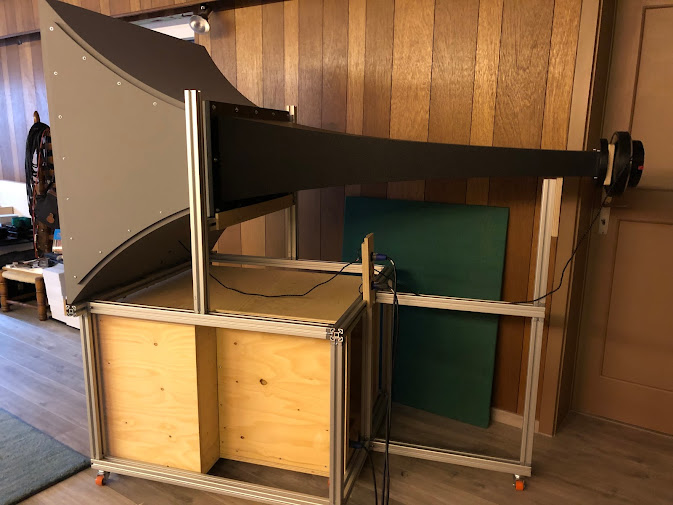 In this chain, the loudspeakers described with active crossover (Xilica XP4080) are used with DSP support. The crossover frequencies are therefore:

Initially, a Butterworth filter characteristic was used, but in the meantime it has been switched almost exclusively to a Linkwitz Riley characteristic with 48dB/octave. This not insignificantly complex structure is controlled by the STA-800D or STA-400D power amps, depending on the power consumption required. The settings of the DSP have been subtly integrated to counteract the typical room modes. In this way, undistorted levels of at least 110 dB can be reproduced. At medium levels, the distortion factors are around 0.1 percent, and at high levels it is still below 1%.

It's all hard core technical and well complicated. Such complex and expansive installations in the past have repeatedly shown very similar soundstages, very dynamic, tonally very complex with clearly noticeable properties. In the past few years I have often had the opportunity to listen to such large horn installations. The tonal properties were usually extremely different. They mostly impressed with an extremely present and fanned-out midrange reproduction, so one believed to hear details that other sound transducer principles are not able to reproduce, including electrostatic transducers.

In addition, the space-consuming structure with its physically extremely large distances between the individual sound transducers and the clear expansion length of the respective sound generation is hardly manageable in the sense of a point source. This effect additionally supports the interpretation of a tremendously extended reproduction of the stage space. It is not uncommon for this sensation to become the originated problem after a short time of listening. The first thing that strikes you is the typical fatigue of our sensory perception. Later, one also notices that the supposed sensation is a result of typical inhomogeneities of such large three-, four- and five-way systems and turns the underlying sensation into its exact opposite, namely making listening increasingly an emotional stress.

It was exactly the same in 2017 in my report, when in the more solid and larger WE7331A replicas, 14'' field coil-driven LineMagnetic woofers supplemented the setup at that time. The originally extremely refined homogeneity, which was achieved in the bass section with two 14'' Klangfilm KL405 in push-pull operation, became so noticeable due to the significantly stronger cone structure that it suddenly got in the way of effortless, natural listening.

Other Sato horn installations or similarly large horn systems that also work four-way with large passive or partially active bass systems sometimes also involve four-segment midrange horns, like the original installations in the 1970ties by Susuma Sato. In these days it was supposed to improve the linearity of the overall frequency response in the upper mids, but examples I did listen to, do play so little homogeneous that it seems possible for the experienced ear to identify all drivers as single sources at the same time, like a large orchestra to be heard separately with insane runtime differences. 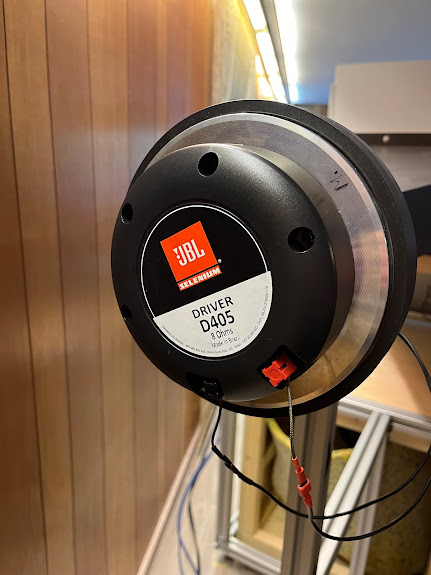 The experience trail shown here is also about tracing the complex path of the various ways that such a structure enables. Here the effort was increased to the extreme that is feasible, as many variants in the pictures impressively are shown. And this complex path of various tests has really paid off for an exclusive refinement at all.

With the usual scepticism about such overexpenditure and also about the technology used here, I did listen to this installation calmly and impartially. Despite a four-way structure (HT-MT-TT-SW), it has been possible to achieve a completely seamless and extremely homogeneous sound pattern with the finest tonal reproduction quality. Over the entire tonal spectrum, i.e. between about 40 Hz up to the limit of my hearing ability in the high-frequency range, an extremely dynamic but never conspicuous sound spectrum is projected into the room with unbelievable ease, which with such cogency I have never heard of such a large-scale installation. One is able to recall approximately a live performance, or to put it another way, the playback is incredibly close to the characteristics of a very good pair of open space headphones, such as the AKG K1000 with near field equalization. Especially with extremely difficult tutti passages of large orchestra recordings, i.e. music that can hardly be reproduced realistically via normal loudspeakers, the set impresses with a huge stage that makes an exact spatial staggering comprehensible, but above all the most important thing of such a reproduction, the unbelievable amount of moving air makes playfully realistically tangible. Other challenges such as smaller jazz ensembles, chamber music or voices, on the other hand, are almost a side exercise. One can enjoy listening to music for long passages without any signs of fatigue, and after all, that's exactly what we should all be aiming for. Even if this is often lost in pointless technical debates, here it shows that it will be possible with almost contradictive conceptions of audio response.

This chain consciously relies on currently produced technology for the large-scale public address use, so it is completely free from the usual hifi terminations of a "beautiful sound", like exalted tube technology, "certain rare old components without which the earth would not continue to turn". Go then...

So if you are striving for something similar, in words a "walkable headphone", you might want to take advantage of the moment. The actual savings discussions might set your mind to convert existing inhouse swimming pools, indoor squash courts or the like in the generally sense. With a room area of less than 50 square meters it becomes difficult, the integration of such an installation into normal family life will probably inevitably lead to opulent maintenance payments. And if you were equipped in younger age with a pronounced play instinct addiction, which might have in your earlier life led to basement-sized H0 model railway installations, you can certainly think about a similar way of presenting such amounts of fun with music reproduction into your life.

Email ThisBlogThis!Share to TwitterShare to FacebookShare to Pinterest
Labels: Listening, Moment of Music, Systems for Music