The Tannoy 15'' Enclosure for the Enthusiast Revisited – The First Birthday

reading further about my 15'-Tannoy enclosure loudspeaker design. A bit more than a year time has passed since the dipole based front loaded enclosure has been finished in its final form and did set place in my everyday audio setup. Today, after that time, I can say this was one of my most important steps in my whole audio life towards a refined, smooth and absolute natural audio response. Since last February these speakers have given me so far the rare present of hundreds hours of inspired musical listening pleasure, were the technical aspects of its origin did step into a background role.
In the former 30 years I have owned several different original Tannoy speakers/enclosures with almost all types of drivers with alnico magnet. All these loudspeakers are quite well known and have several fans around the world. They all show up with similar audible characteristics and attitudes. Their very conspicuous presence of articulation, illusion of space and exceptional dynamic abilities, which are common similarities independent of size and enclosure principle, have made Tannoy to a classic in audio history. They perform in a well known robust tradition where other similar vintage makes from Altec, Jensen, Stephens, University and more are gathering, but were refinement and natural aspects do not play the foremost attitude, instead their typical common habits are more or less similar cheeky frequency ends. The Tannoy typical reflex/vented port cabinet designs (like Canterbury, Lancaster, Mansfield, Cheviot, Arden, Devon and their similar designed predecessors), but as well the highly favored back loaded horn designs (like Autograph, GRF, Corner Canterbury or even both Westminsters) are good examples for more than prominent low frequency response (but unbeatable excellent all-time favorite selling arguments). The latter group extend this spectacular attitude into the region of lower mids as a result of the to short and to small opened backing horns, mixing up with a cocktail of unwanted wooden resonances as a result of large interior surfaces of the horn development.
Excuse me, these classic speakers might be able to fulfill the claims with typical attitudes of electrical amplified performed rock music, but for lovers of naturally performed and articulated music with delicate dynamic structures such designs are are of no use, unable to represent a full spectrum of micro dynamic information. For audio gourmets these classic designs need a lot of work to be a final choice.

A loudspeaker is one of the most important components in a audio set up. As the final transducer of  electrical signals into acoustical waves it has a important function. If it is unable to transform the signals without harmonic relevance and dynamic finesse, other components will not be able to catch up the loss. 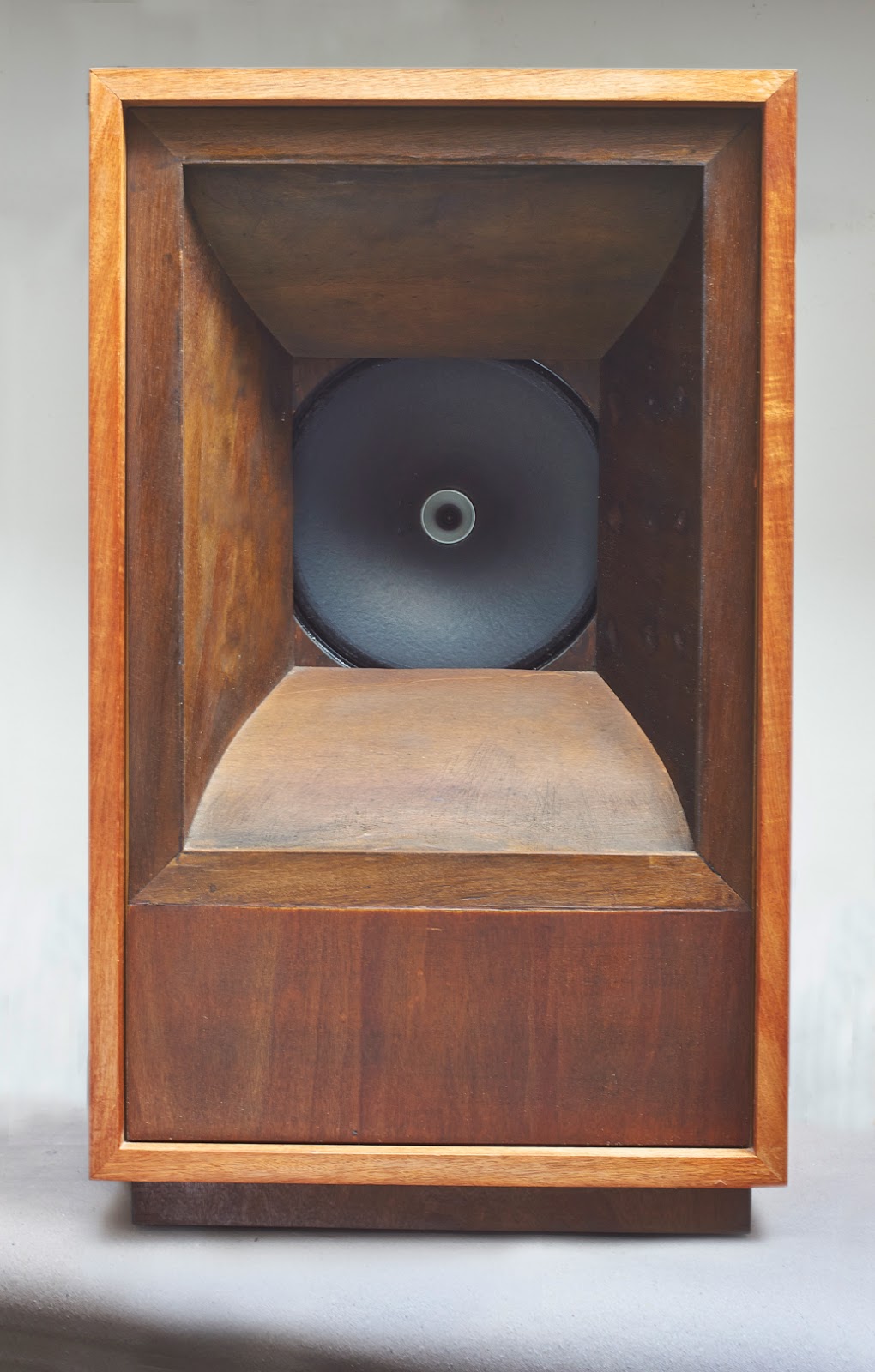 My enclosures did lead my long term relationship with Tannoy Dual Concentric alnico drivers into a complete new adventure of unknown land. My listening experience with such "full range" horn installations from Linemagnetic LM22A/LM555/LM597 with TA7331 inspired the dipole woofer idea for my enclosure, as the LM22A did inspire the front loaded funnel for the medium frequencies (to be honest since the middle 1990ties I did plan to add such funnels to a typical Tannoy enclosure, but I never realized this idea before 2014). Within several articles I have honored the "best audio set ups I personally have listend to" and I am still in hope to extend this experience one day with a larger wooden horn like WE15A in a similar refined set up.

My own unique way to follow such exceptional sets uses a Tannoy Dual Concentric speaker in combination of dipole enclosure, where the purposed half is formed to act like a front loaded horn development and the backing part acts like a traditional open chamber. Such a front horn helps to overcome the most difficult fault of the large 15'' paper cone. The medium frequencies response between 500 and 1500 hz will be mechanically amplified and supported, a tonal spectrum where a cone speaker of such mass and size is physically limited in its ability of resolution finer harmonic details. In the same time the funnel does act as a extension of the cone, who itself is already a seamless extension for the high frequency driver. So the horn is enabled to conduct lower frequencies with its wider and longer opening development. Not only to my personal taste the Tannoy high frequency horn is known to be one of the best two or three horn tweeters built ever. It shows up with a exceptional rare attitude, its seems to be unlimited extended in its higher frequency performance, since it is at the same time completely acoustically invisible, as any for hf-horns typical superficially is at the same time completely absent.

The dipole principle for low frequencies was a early simple invention to obtain fast and naturally sounding low frequency response in early cinemas of the 1930 to 1950 years. Together with the open baffle principle, which is physically seen as a similar design, it was in these days preferred over any closed or ported cabinet design. These came into account when the amplifiers started to be powerful enough to drive small enclosure types to allow complex filter units for massive corrections of low frequency radiation.
The dipole shows some advantages comparing it to other designs, like the fastness of the transients, the completely uncompressed tonal expansion and the non-existence of any wooden resonances, which are typical for all cabinet priniciples. Open baffles mostly fail any acceptance in living room surroundings because of their space consumption (a square meter plus wings is a minimum to obtain some LF below 100 hz). The folded baffle into a such dipole design ends up with a quite room friendly size of typical classic speaker enclosures (here my speaker dimensions are 90 x 55 x 45 cm, HxWxD).

But the backward radiated energy makes a delicate room positioning necessary. The speaker radiates wide parts of the frequency spectrum in anti phase mode, a effect which makes a minimum distance to the backing walls necessary to avoid problems. Anything closer will result in typical phase erasure and adding effects, both can degrade the tremendous abilities of the speaker. I have positioned mine with a distance of 60cm from the backing walls. On the other hand the funnel helps to direct and disperse the forward radiated energy, which is a another welcome advantage, this helps to keep the vagabond room reflections in almost perfect control and limits further room treatment to a minimum.
If you can set up the speakers with such space, you will be rewarded is one of the most dynamic and expressive loudspeakers available, together with a rare freeness of resonances and a exceptional refinement of finest micro detailed harmonies, most other speakers of that league cannot compete with.

I am now extremely happy about the behavior of this a phantastic speaker, a result which I didn't expect when I started to built up that concept. More than this the speakers are able to work in a highest possible stage of harmonic audio response with a almost invisible holographic dynamic soundstage other speakers of that size do not follow.
This speaker works so refined that it made possible to detect several limiting aspects in my chain, which in former times I was not able to detect and resolve.

I hope that such design will find some more interest in the coming future,
Volker