today I want to start my final sales with 12-inch  tone arms. As some people may have recognized, within the the last eight years this blog published extensive informations about my Conversion Kit. In 2012 I started to sell such kits in order to convert SME 3009 SII arms into their predecessor, the legendary so called Mark One type. This early (1958) tone arm was a modern masterpiece of British engineering and its market entrance was some purely dedication to the first moving coil stereo pick up cartridge ever the Ortofon SPU (Stereo Pick Up). This remarkable cartridge was made in the tradition of the former monaural cartridges from different makes, all were extremely low compliance types and were optimized for high tracking mass in order to track safely 78-records. With high torque record players  the pick up process was brought to a seer side. In 1958, in the age of micro groove recordings, the most players still were equipped with heavy arms, so the new stereo cartridges were made to match this masses. As everybody knows it didn't take a long time and the mass of typical cartridges made for the audio amateur aimed to another direction, the ultra low mass cartridge and dedicated low mass tone arms. The SME Series Two got lighter and lighter, got improved for further lightweight, got resembled into Series Three with less mass to match ultra high compliance cartridges of the late 1970ties.
In the 1980ties a huge rediscovery of the tube era was synchronized with the esteem of the equipment of the golden time of audio, the 1950ties. The manufactured quality of no equal in these days and the depths of engineering got discovered again. Tube amplification, idler wheel turntables, former professionally used speaker systems, horn systems and all dedicated technology found back for some lovers to be highly superior than the commercial audio products which had flooded the world since then. So the professional tone arms from SME, EMT, Ortofon, all made in quite small amounts for studio applications got back into demand. In Japan these were combined with broadcast cartridges like the Denon DL103 or the legendary Ortofon SPU. In Japan several new made pick up cartridges from Koetsu, FR, Ikeda, etc. took the path to the low compliance to be highly superior into current products. A heavy arm with a low compliance cartridge on a high mass record player reproduces vinyl completely different than the typical high end products of the commercial audio market.

In the last couple of years I could made several aficionados world wide happy with my SME MK1 conversion kit. Additionally I refurbished outworn SME 3009 SII into like new 12 inch tonearms which are assembled with stainless steel arm wand and internal balsa wood damping element, heavier weights and highly improved internal 99.99 % silk isolated silver wire and good RCA terminals in order to find back to the original performance of the legendary heavy SME 3012 MK1 and improve even that.
When I started this idea outworn SME 3009SII were still available in countable amounts, so it made sense to convert these into something superior. But today there is no more stock available in any amounts, so I had sadly to stop my idea. I will now sell my last three converted SME 3012 from my own stock. When these are once sold a exceptional quality item for analog sound reproduction of vinyl will be gone forever or you will need to spend thousand of euros to find a original MK1 in unknown condition without any spares available.


The first arm is in like new condition without any marks. It has been completely refurbished and got the silver internal wire, new damping balsa wood and new RCA terminals with additional ground contact. This arm is like new condition and performs with a low compliance cartridge like SPU light years better than any SME arm available. Wider more refined soundstage, more undistorted and deeper unlimited low frequency performance, far better trackability make such a combination superior to any arm I do know. Read what customers do say about their own experience. 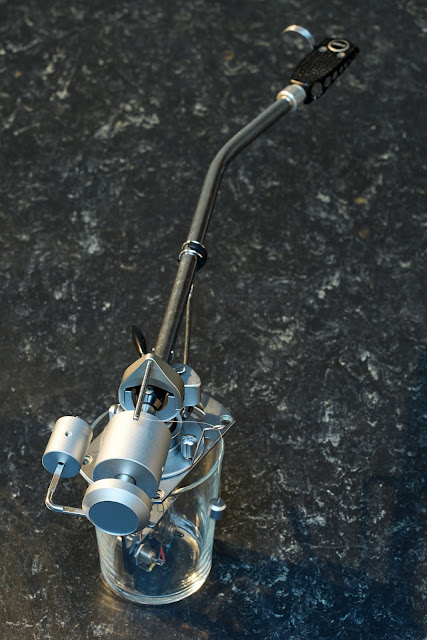 This one comes with anti skating weight and original SME head shell with raised logo. 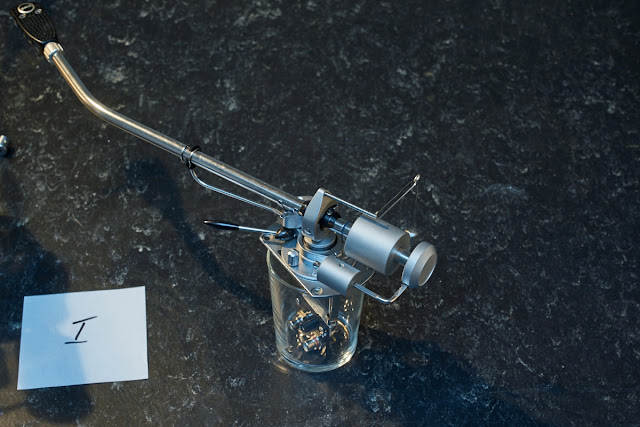 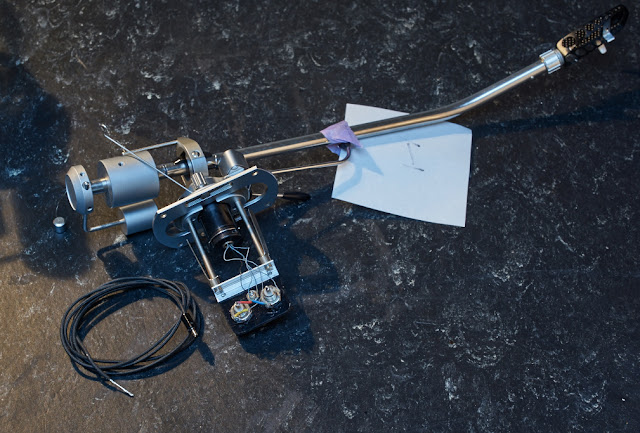 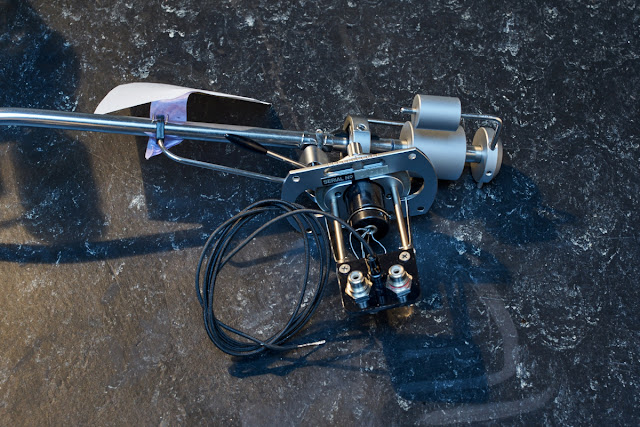 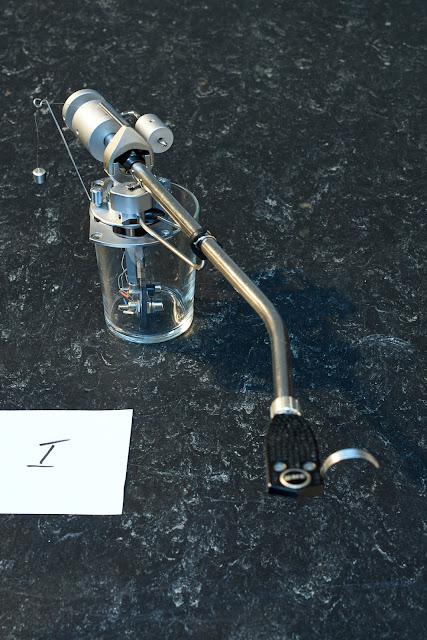 The next one is asthetically in very good condition. It shows very minor spots in its galvanizing, technically like new. To compensate this I put a original SME connection cable on top of that package. 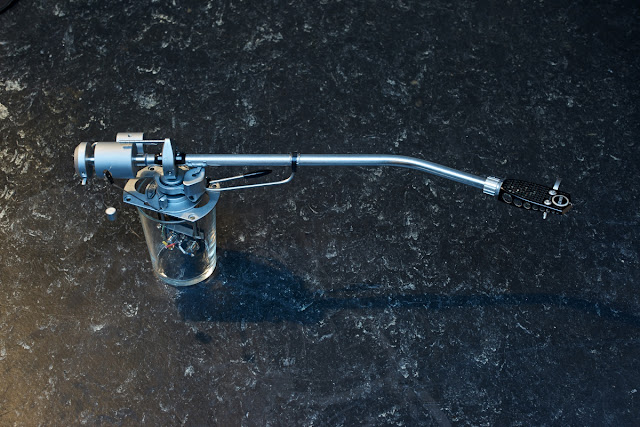 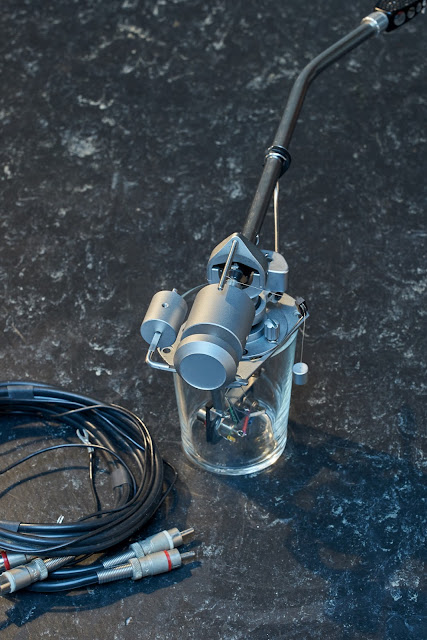 This one has the later anti skating guide with roller, head shell is original SME with raised logo. 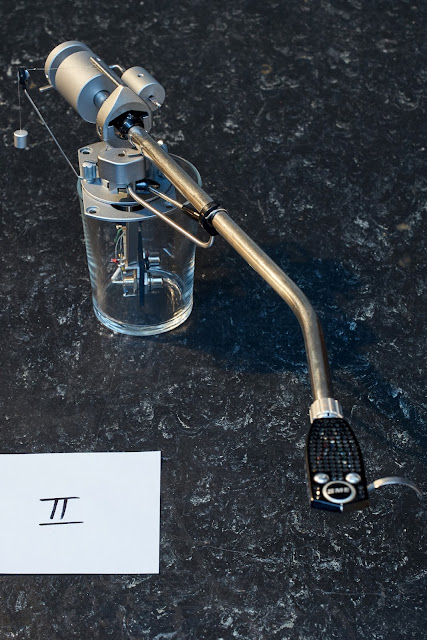 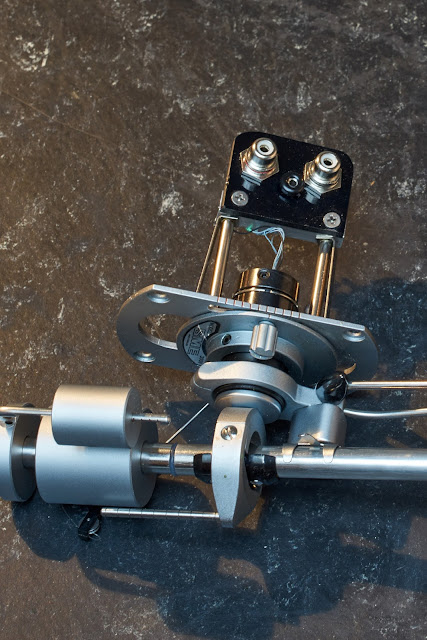 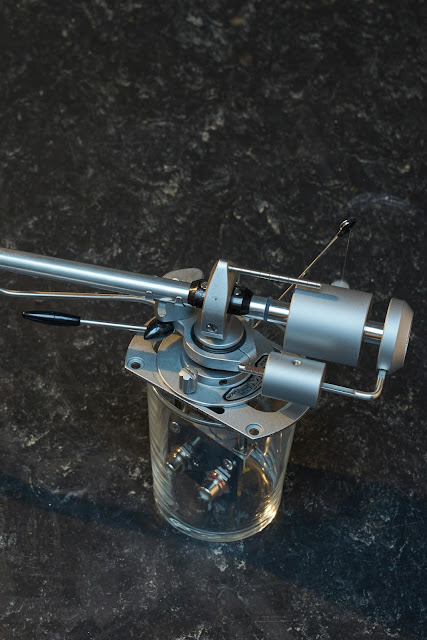 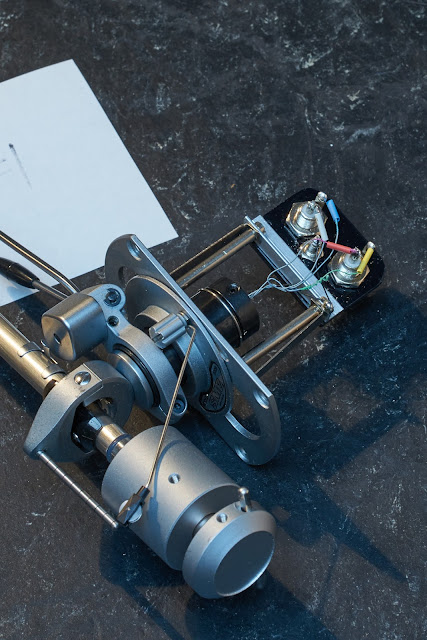 This one will follow after request since it built into a presentation box for fairs. It is in better than new condition and my last sample of these.

As next offer I have a Australian studio tone arm, which was mainly used at Technics direct drive turntable at broadcast stations.  It is a extremely well manufactured arm with micro ball bearings and a wide range of additional weights to compensate different cartridges. This feature and the built quality brought me to the idea to convert this arm into a heavier stainless steel version to perform with low compliance cartridges as well. This arm like many professional arms has no cueing option and needs to be operated manually by hand, I have a rest included to make it work. The tone arm has the exact overhang figure like the SME 3012, which means 312mm between center rotation axis and diamond tip. 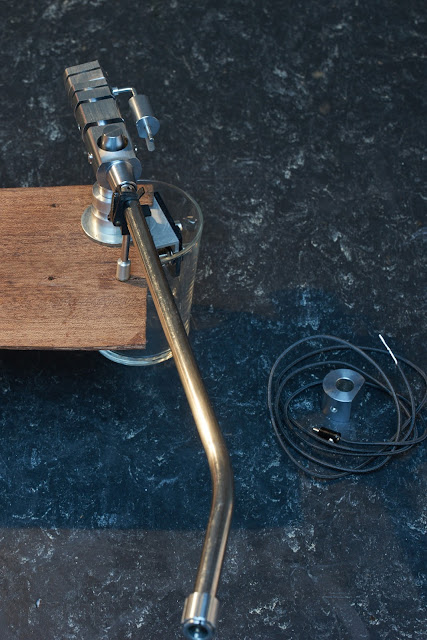 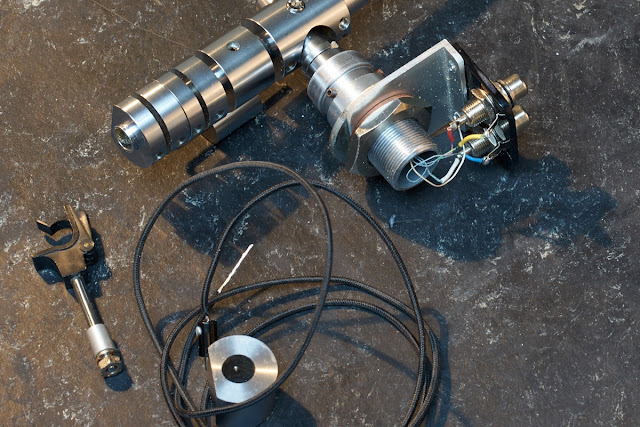 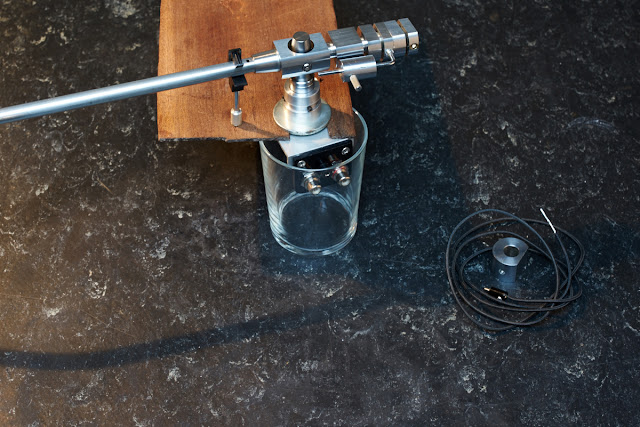 This is a perfect solution for those who want a 12-inch arm of best quality with out the price tag of the well known brands. This arm performs on the same level like other stainless steel arms with micro bearing and internal silver wire. You don't know one, Fidelity Research FR66 or some later Ikedas. Yes they feature a lift, but otherwise ten times the price.

The next arm is converted from a typical japanese 9-inch record player tone arm, maybe Jelco. It shows up with the same details like the arm before. Precision micro ball bearings, internal 99.99% silk isolated silver wire, balsa wood damping element, RCA terminal with separate grounding contact. Geometry is identical with SME 3012, which means an overhang of 312mm. The unit features a brass base, which will be screwed with two M4 screws from underside and will simultaneously lock the RCA terminal from underside. 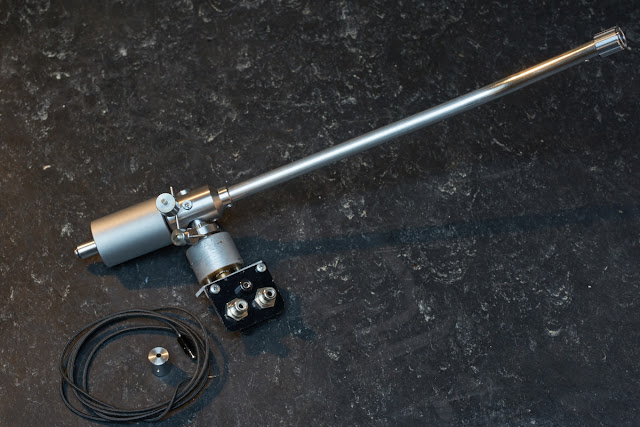 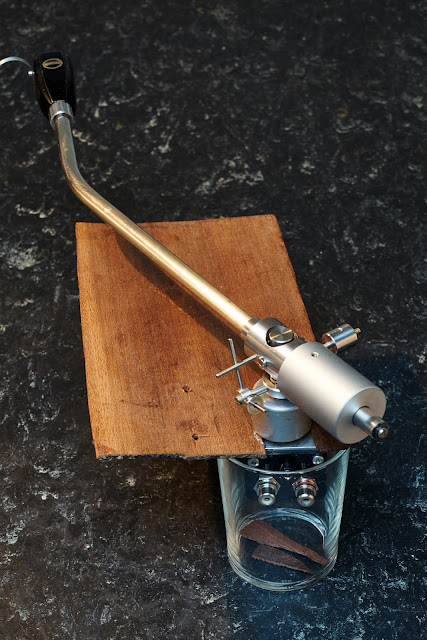 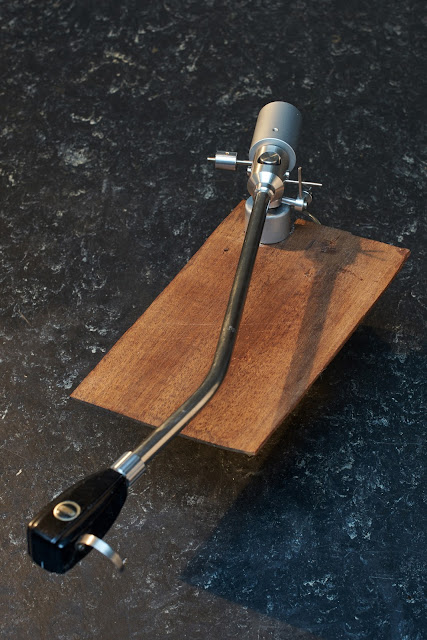 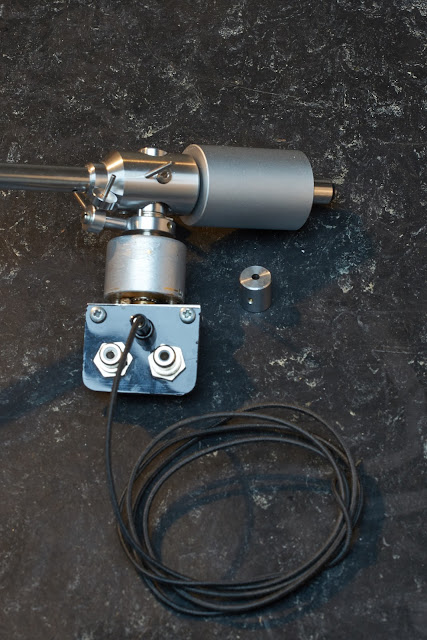 The bakelite SPU headshell is shown just for illustration purposes and is not part of the sales package. This offer is dedicated to somebody who might build a own plinth for a idler wheel turntable and who does not want to spend thousands on a tonearm, when the player will cost a reasonable amount. Beside comfort reasons this arm does not limit the audio performance comparing the arms shown in the upper section.